It’s hard to believe, but it has been exactly one year since we released DNSDB Scout™, the graphical user interface for DNSDB, built on the Google Chrome Extension™ framework.

Since then, the Chrome Extension has been installed in over 1000 browsers and has over 700 active users.

Based on the overwhelmingly positive response from our user community, we released a DNSDB Scout Add-On for Mozilla Firefox in January of 2019. The Firefox Add-On currently has a few hundred installs and close to 100 active users. These numbers are in alignment with current browser market shares and trends.

Since its initial release, DNSDB Scout has seen eight public updates (1.0.5 - 1.0.13), which have included many improvements and new features.

Our motivation for DNSDB Scout remains unchanged – We want to continue to deliver a lightweight and easy-to-use GUI for making DNSDB queries with all of the API features intact.

To that extent, we added support to DNSDB Scout for DNSDB Community Edition, when it was announced during the RSA Conference 2019, as well as support for the latest API features the day they were announced.

And today, for the one-year anniversary, we are pleased to announce the release of DNSDB Scout Version 1.1.0 for both Chrome and Firefox browsers. It contains a few minor bug fixes, as well as “quality of life” updates such as granular timefencing and official DNSDB Export server support that we hope will make the user experience even better. 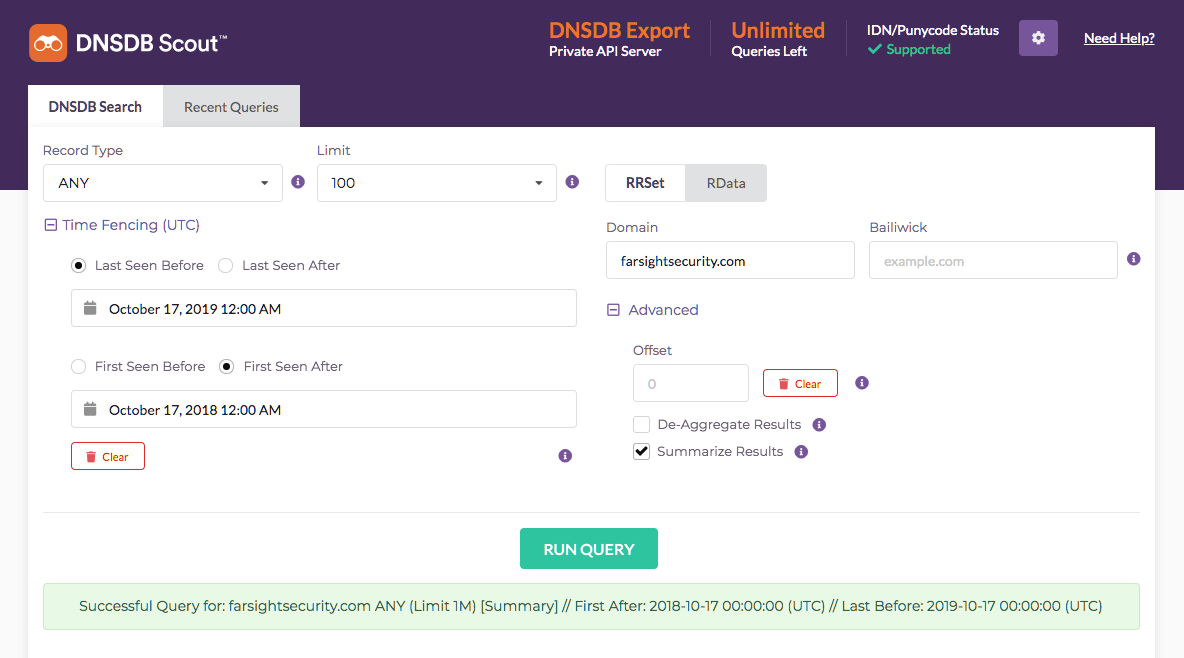 As with all current Google Chrome Extensions and Mozilla Firefox Add-Ons, they must be obtained and installed via their respective official web stores.

You can search each store for ‘DNSDB’ or ‘Farsight’, or by visiting the DNSDB Scout pages directly with reasonably current versions of Chrome and Firefox.

We will continue to release regular updates for both versions of the DNSDB Scout extension through their respective sites, and we welcome bug reports and feature requests. Should you find any bugs or have a feature idea, please contact us through the Contact page or via support@farsightsecurity.com.

For more information about getting unrestricted access to DNSDB API, please see our Order Services page.

Tyler Wood is a Software Toolmaker with Farsight Security, Inc.

Daniel Schwalbe is the Director of Engineering and Deputy CISO with Farsight Security, Inc.