Each address of that sort gets built from four eight bit bytes, resulting in a 32-bit address. A 32-bit address space has the potential to yield 2^32 = 4,294,967,296 IPv4 addresses, which naively sounds like rather a lot. Then again, the world's a big place, many people use multiple devices today, and a variety of legacy issues, inefficiencies, and other technical realities mean that many of those ~4.3 billion theoretically-available IPv4 addresses are not now, and never have been, actually available for use. The net result is that like cold beer on a hot day at the lake, the world's pool of IPv4 addresses has quickly gotten drained.

The inadequacy of the IPv4 address space was recognized as long as twenty years ago, see RFC175 ("Recommendation for the IP Next Generation Protocol". Slow (but-steady) progress has been made ever since.

Please note the word "slow" in the preceding sentence: IPv6 deployment has not occurred nearly as fast as had been hoped. This is a real problem given the rate with which IPv4 addresses have been consumed. In fact, now that all regional IP registries (except AFRINIC) have exhausted their traditional IPv4 free address pools, IPv4 addresses are becoming substantially more difficult to obtain.

Free pool exhaustion means that new ISPs (or other qualified parties needing "wholesale" quantities of IPv4 address space) now find themselves unable to directly get that space from their regional registry.

Those who need more IPv4 addresses than they can get from their regional registry typically need to arrange for a third party to transfer IPv4 address space they no longer need. Those sort of "designated transfers" may involve payment of a "fee" to the transferring party (although technically the transferred IPv4 addresses are not being "sold.") This can quickly become expensive.

The alternative is IPv6. It offers abundant address space at negligible cost, and the time has come for sites to migrate from IPv4 to IPv6, or at least to run "dual-stack" with all hosts being connected via both IPv4 and IPv6.

So how's IPv6 integration coming? Are people embracing and deploying IPv6? Or is IPv6 still in the deployment "doldrums," just limping along? Farsight Security, Inc.'s Passive DNS allows us to empirically answer that question. Looking month-by-month, let's tally the number of unique effective-2nd-level domains ("base domain names") associated with one or more IPv6 AAAA records.

We can then graph those values.

But how to mechanically get the data we need? When approaching a study of this sort, the first thought is that this sort of scenario might be a perfect candidate for using the Farsight dnsdb_query command line tool, simply selecting all quad A records for dot com or some other top level domain (TLD) of interest, adjusting time fencing values for each month. In fact, however, that sort of "brute force" approach might miss important pockets of IPv6 deployment in other TLDs, is inefficient, and is subject to a hard cap of a million returned records. For all these reasons and more, that approach likely just wouldn't work very well for this purpose.

Fortunately, there's an alternative. In addition to making passive DNS data available via our DNSDB API web interface and via our command-line interface/API, Farsight Security also sells raw passive DNS data in MTBL format as "DNSDB Export." DNSDB Export is Farsight's premium product, and makes it possible for you to arrange to receive an "on-premises" copy of the entire Farsight Passive DNS database. At that point you can run complex local queries against that database, including queries like the ones needed to answer the question at hand in this case.

Our Engineering team members provided invaluable support for this research. Farsight Engineer H.S. took a list of IPv6 prefixes we supplied from IANA, and then extracted all AAAA (IPv6 address) records present in the DNSDB Export files. We then processed those records to extract all unique effective 2nd-level domains, constraining the data by use of a moving monthly "time horizon." (The scripts we used to run those analyses appear at the end of this article). The resulting data looks as follows… 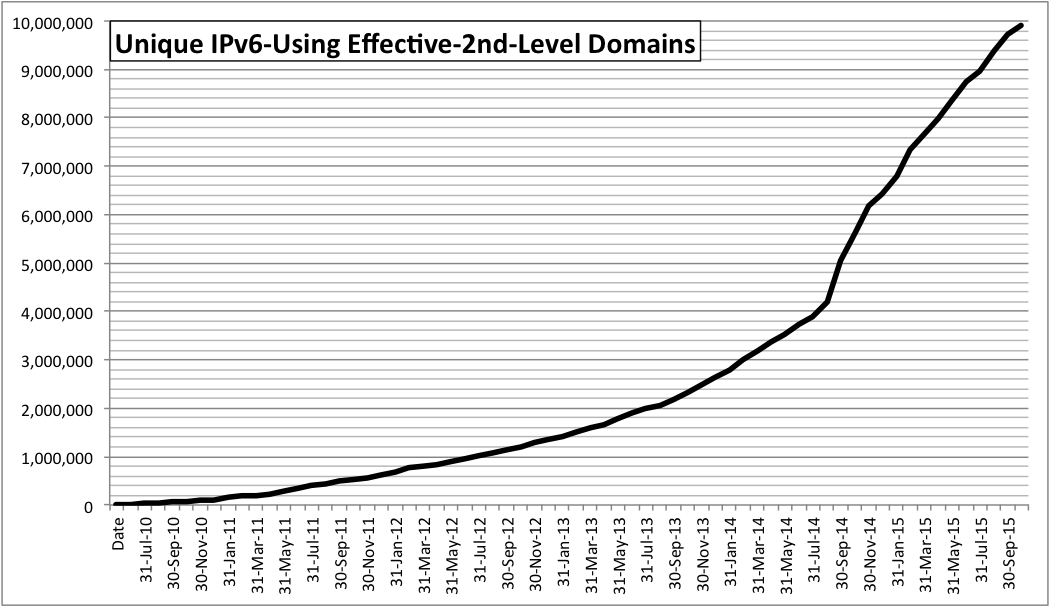 Looking at that graph, we can see that while it starts very close to the origin in June 2010, by the end of November 2015, we're up to nearly ten million unique effective-2nd-level domains that use IPv6. That's commendable progress, although we still obviously have a lot of work still to do.

If you've been reluctant to embark on deployment of IPv6 in your own infrastructure, perhaps assuming that IPv4 address space will remain cheap and relatively easily available forever, that fantasy has come to an end (unless you're based in Africa – AFRINIC does still have some IPv4 address space left for qualified AFRINIC-region requesters).

If you're not in Africa and need material amounts of IPv4 address space these days, you're probably going to need to arrange for a designated transfer from a third party, and that likely won't be cheap.

The rest of the world (e.g., everyone except those in the AFRINIC region) really needs to be moving expeditiously towards deploying IPv6, as Farsight Security, Inc., itself has.

Nearly ten million domains have already made the IPv6 plunge. These days, IPv6 largely just works. Isn't it time for you and your company to deploy IPv6, too, assuming you haven't done so already?

Finally, if you have a need for in-depth historical data for DNS analyses, nothing beats Farsight Security, Inc.'s DNSDB Export as a source of data for custom DNS data mining.

Appendix: The Simple Scripts Used To Generate The Data Used In This Article