So What's The Big Deal About New Domains?

One of the areas that Farsight Security, Inc., (FSI) has chosen to focus on is newly observed domain names. You might wonder, "Sheesh, why anyone would bother paying attention to new domain names? People create new domain names all the time, right?" It's true. Anyone can create new domain names – you may even have purchased some of your own. However, as we'll see, most new domains aren't created by well-meaning people. As FSI's own CEO, Dr. Paul Vixie observed in his 2013 CircleID article, "Taking Back the DNS:"

Most new domain names are malicious.

I am stunned by the simplicity and truth of that observation. Every day lots of new names are added to the global DNS, and most of them belong to scammers, spammers, e-criminals, and speculators. The DNS industry has a lot of highly capable and competitive registrars and registries who have made it possible to reserve or create a new name in just seconds, and to create millions of them per day. Domains are cheap, domains are plentiful, and as a result most of them are dreck or worse.

If most newly created domain names are "dreck or worse," why track them? Well, if you could quickly and reliably tell that a domain name you're seeing is new, you might simply decide to wait a bit before accepting traffic from a server using that new name.

Waiting a few hours (or even a whole day) before talking to a new domain is of little consequence if that domain is legitimate, but waiting a day (or even just a few hours) can make a huge difference when it comes to dealing with a domain that's malicious. To understand why, remember that the bad guys count on being able to quickly create a new domain, immediately begin to misuse/abuse it, and then repeat the process as needed. This approach lets at least some bad guys stay one step ahead of the good guys, routinely hopping from one new malicious domain to another one. If you temporarily block access to their new domains, you can automatically avoid a lot of risk with very little in the way of collateral damage.

Why Are The Bad Guys In Such A Continual Hurry? Why Do They Constantly Need New Domain Names?

Cyber security is often framed as a "race" between the attackers and the defenders, with the bad guys trying to do their deviltry before the good guys can react. This tends to be particularly true for domain names. This is because:

All of these factors and more drive a typical miscreant to go through domain names the way most of us might eat bridge mix. Let's look at data publicly shared by Mr. Joe Wein, a leading anti-spammer, to see a concrete example of this phenomena. 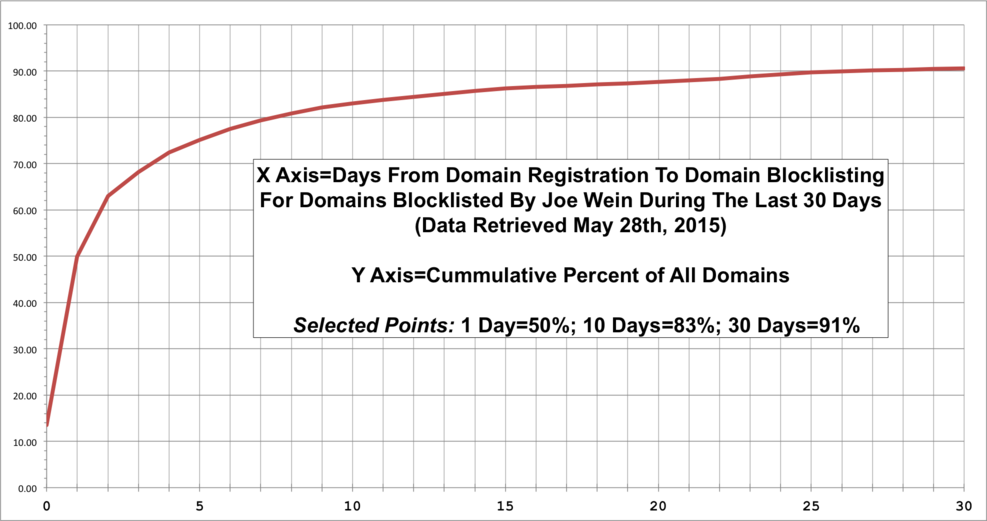 As noted in the boxed area of the graph, when we look at domains blocked by Mr. Wein during this period, half were listed by him on either the same day they were registered, or on the very next day. 83% of the domains that Mr. Wein listed were listed within ten days of registration, and more than 91% were listed within 30 days of their date of registration. We can thus see that the usable life of spam-related domain names is very brief.

The brevity of that interval (e.g., over half of all the domains listed by Mr. Wein were listed the day of registration, or by the day thereafter) is particularly amazing when you consider that that delay includes both any spammer-induced delays, AND the time it takes Mr. Wein (or more accurately, his spam domain identification programs) to notice that a domain is being abused and should be listed.

Given that over half of all the data points in this data set represent delays of one day or less, ideally we'd like to be able to calculate more fine-grained measurements, perhaps measuring the time from registration to blocking in hours, minutes and seconds rather than days. Unfortunately, Mr. Wein currently only lists dates.

Let's now talk a little about Farsight Security's actual NOD(tm) product. NOD is generated from Security Information Exchange (SIE) Channel 212. Channel 212 contains newly active base domain names (these are domain names that have NEVER been seen by a Farsight sensor node (since DNSDB started in June 2010)). Channel 212 has a volume of roughly 50,000 domains/day.

The 50,000 domains/day on channel 212 is quite a tractable number of domains, and if anything, may actually seem like a surprisingly small number. However, consider that over the last five years, Farsight has already seen most domains that are in use. The remaining ~50,000 domains/day represent either genuinely brand new domains (not surprising, given the creation of many new gTLDs recently by ICANN), or domains that have been around for a while, but which have somehow managed to elude Farsight's 450+ Passive DNS sensors nodes till now.

NOD data products are derived from channel 212, and are normally distributed to subscribers either via rsync on a minute-by-minute basis (used for blocking email in conjunction with rbldnsd), or via incremental zone transfers (IXFR) for use in temporarily blocking all network access to the new domains via BIND.

One point that sometimes confuses people when they hear about NOD is the short duration of time it focuses on. Can blocking domains for just a day or less really make a difference? Yes! To understand why, remember:

Subscribers using NOD get to decide if they want to block/ignore new domains for periods ranging from five minutes to 24 hours, as represented by coded values incorporated in the rbldnsd-format and RPZ-format files:

Exact domain observation time data is also available, for those who may want to use a custom time interval.

Getting More Information About NOD

For more information about subscribing to NOD, please contact the Farsight Security Sales department at sales@farsightsecurity.com or +1-650-489-7919, or see https://www.farsightsecurity.com/solutions/threat-intelligence-team/newly-observed-domains/